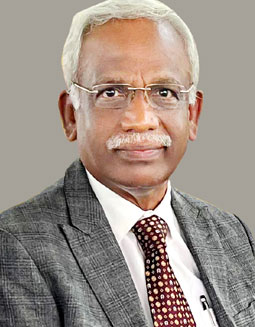 Col. Dr. G. Thiruvasagam is serving as the Vice-Chancellor of AMET University, Chennai, India since 2012.

A person of academic and administrative eminence, Col.Dr.G.Thiruvasagam brings with him his dynamic experience of five decades in Higher Education, his keen sense of justice and his generous spirit of fraternity all of which served him well in a career spanning 34 years as Professor of Commerce and Management and 10 years as Principal and a stint as Member of the Syndicate of Madurai Kamaraj University that culminated in his being appointed as Vice Chancellor for two successive terms (between 2006-2012) of two eminent state universities in Tamil Nadu namely Bharathiar University, Coimbatore and the prestigious 167 years old first 'Port' University of India, the University of Madras.

Col.Dr.G.Thiruvasagam obtained his Ph.D from Madurai Kamaraj University in the discipline of Management, and later went on to do his post doctorate from University of Southampton, United Kingdom. His academic career spreading over more than five decades, include the honour of having been invited to associate with the University of Southampton, UK, during 1991-92 as Research Fellow, Visiting Faculty at National University of Singapore during 2011-12 and during the year 2015-16, invited to serve as Visiting Professor at Alam Maritime Resources, Malaysia.

Apart from authoring Eighteen books, of which a few to be mentioned viz. Qualitative Research Methodology, Business Research Methods, Logistics Management, Financial Management, Customer Relationship Management, Introduction of Shipping, Company Law and Essentials of Maritime Law and Insurance, he has also authored thirty six publications in National and International Journals, which have had considerable impact among academicians and research scholars.

Col.Dr.G.Thiruvasagam has had the privilege of serving as a Member in various committees of prestigious Apex bodies of Higher Education including Planning and Academic Committees and Visiting Committees of University Grants Commission (UGC), as well as Visiting and Evaluation Committee Chairperson of National Assessment and Accreditation Council (NAAC). He has served as Executive Committee Member in Tamil Nadu State Council for Higher Education which is the top level Planning Board of the Higher Education of the State. He was one of six Vice Chancellors of India invited to serve on the Central Advisory Board for Education (CABE), the apex body responsible for making recommendations to the Ministry of Human Resource Development on all aspects of Higher Education.

Col. Dr.G.Thiruvasagam is serving as President of the Association of Indian Universities (AIU).

In recognition of his academic contributions in the field of higher education, he was awarded with "Colombo Plan Fellowship" by the British Council, United Kingdom in 1992, conferred with "Colonel Status" by the Tamil Nadu State NCC Battalian in 2008 and adjudged as the "Best Management Leader" by the International Business Management Council, Mumbai in the year 2016. He has held several notable positions and received awards including the "National Award" for Social Service from the then President of India, Dr.A.P.J. Abdul Kalam and the "Service above self" Award from the Rotary International.

Col.Dr.G.Thiruvasagam has visited almost all the major countries of the world like USA, UK, Germany, France, Australia, Japan, China, Spain, Singapore, Hong Kong, UAE, etc. and has interacted with the authorities and the scientists in their Universities and their industries.